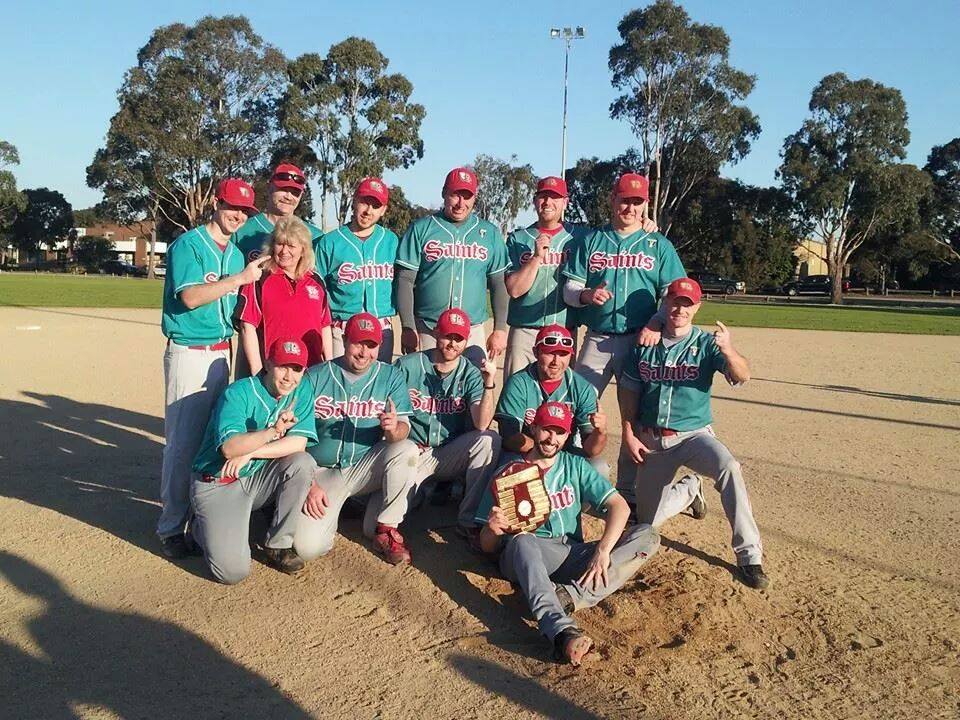 Our C Grade team are the 2014 Premiers after a 12-6 win over Panton Hills BC in the Grand Final.

Played on Saturday 6th September in perfect conditions at Knox, the Sainters were out to cap off a great season that saw us finish on top of the ladder and advance through to the Grand Final after a close fought victory over GMBC 4-3.

Panton Hills path to the final was a little tougher. Finishing third at the end of the home and away season, they had to account for a fast finishing St. Kilda and then beat GMBC who were looking to rebound.

With that form we knew we would have to be near our best and produce a consistent effort all game.

We got on the board early and looked to extend our lead, but the Redbacks would not go quietly and were able to score 5 runs with 2 out and take the lead with less than 40 minutes to go.

It took a little longer than we anticipated, but as we have done all year, we were patient in the batter’s box and were able to consistently work the count and get good pitches to put in play. With Michael Legg coming on in relief and shutting the door we were able to build some momentum in the last two innings and put the game beyond doubt.

The 12-6 scoring line is a little flattering as Panton Hills provided stiff competition and an upset by them was not out of the question.

It really was a team effort with everyone contributing offensively, however Kris Linley was the standout and clear MVP with 4 hits and 4 runs scored at the top of the order.

Thanks to Sue Crebbin for scoring all year and congratulations to team managers Michael Legg and Jonathon Rogers on guiding the boys to the ultimate prize.