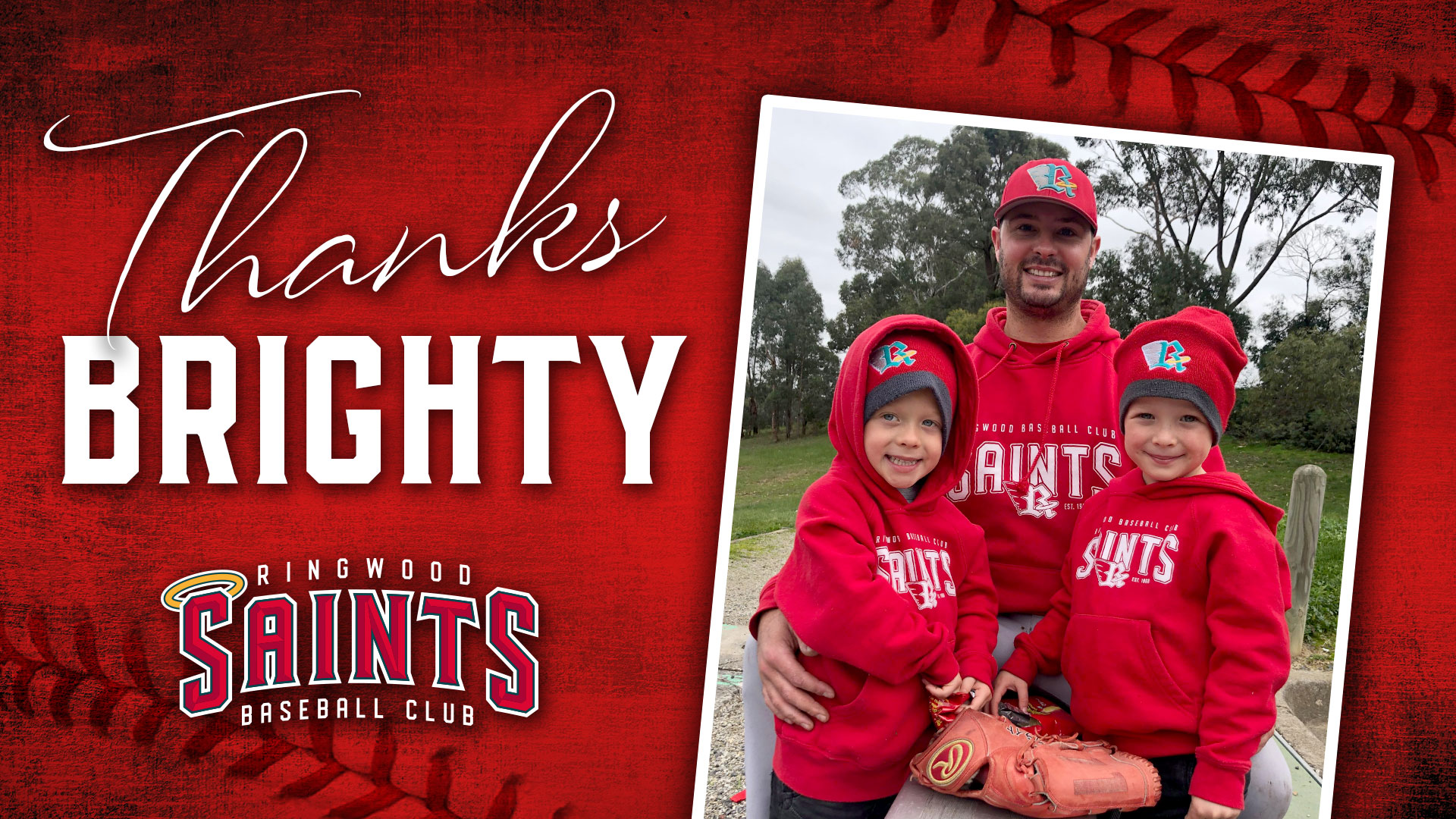 The recent cancellation of the 2021 season has meant the club has missed out on giving Club Coach Adam Bright the recognition and send off he richly deserves. In one of the worst kept secrets going around, Adam earlier this year informed the Club that he would not be returning to the role in 2022.

Adam was appointed Club Coach way back in 2013 and in that time he has taken the A1 team to to the finals regularly and our Firsts were currently sitting 2nd on the ladder and looking at another deep run in the finals.

Brighty’s influence on the entire playing group’s development can also be seen in the 8 premierships from the rest of our senior teams in that time.

Adam played junior baseball with the Saints and the club was thrilled that he came ‘home’ after spending several years overseas playing professionally in both the USA and Japan. Adam also represented Australia on a numerous occasions and spent several seasons in the ABL with the Melbourne Aces.

His experiences within these teams gave Adam a huge knowledge base to draw from and he has always been willing to share that with anyone who was looking to improve their baseball regardless of their ability.

“As president it has been a pleasure to have Adam as our senior coach. His experience, professionalism and rapport with not just the players but all of our members has been invaluable and has contributed greatly the overall success of the club.  I look forward still seeing Brighty around the club, enjoying a beer (or two) in our new club rooms.”
Luke Painter, Club President.

“It’s a shame the last few seasons have been affected the way they have, not stepping on the field at all last year and again cut short of completing another enjoyable winter of baseball. After many years leading the club and being so, so close to winning the premiership a number of times, all I wanted was to end my club coaching time by bringing the shield back to Ringwood and celebrating with all of you that make the club such a special place.

I have loved every moment being apart of Ringwood Baseball Club. From a 5 year old starting T-ball, and then fortunate to come up through our successful junior program. From there, the thrill of playing A grade as a teen and then honored taking over as head coach the past 8-9 years has been a very fulfilling journey.

There are so many people to thank along the way, I can’t name them all but you know who you are. I must however acknowledge the efforts of certain individuals that made the job much easier.

Our committee is always filled with die hard Saints, continually striving to make this the best club in the winter league.  All those that have coached or scored across all grades, it’s a big commitment and time away from families. Russell “Slugga” Hodgeson has been by my side every step of the way and honestly could not think of a better right hand man, he is loved throughout Victorian baseball.

Thank you to Chris Harman, Nick Unland and Jacob Evans who all have done an amazing job of coaching the reserves. It’s a tough gig trying to manage the early game then quickly switch on and get prepared the best you can to perform at your best in the firsts.

Lastly my greatest appreciation is for my mum Jacquie. There was all the running around for me as a junior player, but now all the Thursdays and weekends watching over my sons Bodhi and Brax, has allowed me to continue coaching these extra few years.

I am confident stepping away now is the right time. I want enjoy as much time as I can with my boys without the additional commitments. The club is in good hands moving forward and excited for the fresh ideas the new incoming club coach will bring. Ill be watching from behind glass of the fantastic new club rooms, cold beer in hand.

I hope everyone is keeping well during this unfortunate time, looking forward to getting together once again at Ringwood Saints Baseball Club”.
Adam Bright

Although Adam wont be returning as coach next year, he has been actively involved in helping the club find our 2022 coach. We hope to make that announcement in the coming days, but needless to say they have big shoes to fill.

On behalf of everyone at the Saints, we thank Adam for his enormous contribution to the club and wish him all the best as he enjoys some well earned ‘free’ time next winter.